Nokia C7-00 is the very first Cseries smartphone to run Symbian^3 and a device we became familiar with last month, courtesy of a leak. Now, the device surfaced on the web once again, in Hong Kong, where the following image was running loose. 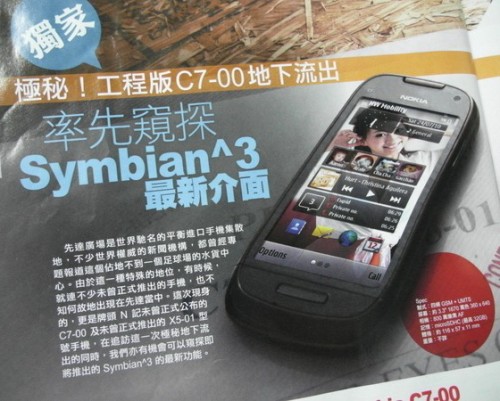 Engadget China claims that the C7 will incorporate a 3.3 inch multitouch display, instead of the 3.5 inch screen we knew about. Said display will support a 640 x 360 pixel resolution and we learn that the smartphone’s specs list also includes a 3.5mm audio jack, a microUSB port, an 8 megapixel autofocus camera with HD video recording and GPS.

WiFi is also featured and if you’re expecting a launch date from us, there’s no such thing to be found, yet.