After months and months of speculations, rumours and whatnot, we’ve finally got a decent tip regarding the real launch date of the long-awaited Palm Pre smartphone. An internal Palm memo revealed that some meetings will take place at the beginning of June and they’ll end on Friday, June 5th with a “launch lunch”. 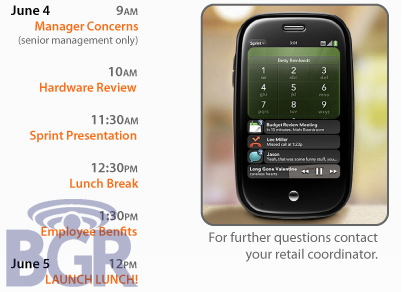 However, one should consider the fact that Sprint usually launches its new phones on Sunday, so this is not out of the question. We’ve also learned that Best Buy is also planning a trial launch of the Pre handset on June 7th, so Sprint will have to launch the phone till then or on the same date.