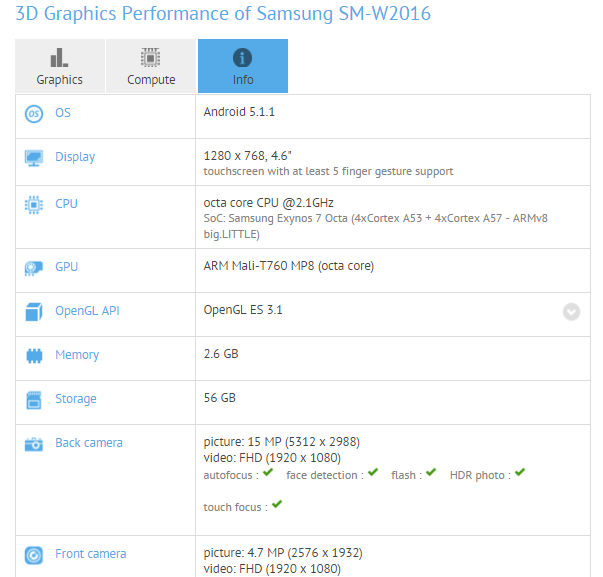 On the Asian market, producers like Samsung are launching from time to time, flip-phones – a style that seems to be very popular around there. In the company’s portfolio we have the Galaxy Golden range of devices, line that soon will get a new member, a flagship one.

We’re talking about the Samsung Galaxy Golden W2016, smartphone that is revealed today through GFXBench along with some of its specs. The phone in case arrives with a 4.6 inch HD display (1280 x 768 pixels), with an octa-core Exynos 7 processor and with a 3 GB RAM memory chip coupled with 64 GB space of internal storage.

Galaxy W2016 brings an ARM Mali-T760 MP7 graphic processor, a 16-megapixel rear camera and a 5-megapixel front-facing sensor that can record videos at 1080p. From what it seems, this new flip-phone will run Android 5.1.1 Lollipop from factory, and not the freshly announced Android 6.0 Marshmallow.

We get to know that Samsung W2016 will offer NFC support, Bluetooth, GPS, barometer, accelerometer and a proximity sensor. According to Zauba, site that follows the products arrived in India, this new device will be priced between $400 – $520.