Sony Ericsson has been leaking quite a bunch of handsets these days, most of them being blurrycam appearances. The SEMC Blog has published the photo below, that shows three Xperia handsets and a feature phone, a very intriguing lineup. 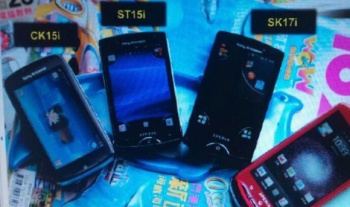 The feature phone is dubbed Sony Ericsson CK15i and comes with a 240 x 400 pixel touchscreen, plus a sliding keyboard. The Xperia series units include a model called the ST15i and the SK17i, without specs for now. The third Xperia model is called the ST18i and could be the revamped Xperia X8.

The rumored features include a 1GHz CPU, a 3.7 inch touchscreen, Android 2.3 Gingerbread and an 8 megapixel camera with 720p HD video recording. The last series of leaks coming from SE included a Cybershot phone and Walkman models… Are we in for a summer treat?