If you thought that the XPERIA X2 smartphone was only meant for the UK market, where it was sold and then dropped by Vodafone recently, guess again. Turns out that the device is ready for availability, via Sony’s American Style store, dubbed as the Xperia 2a. 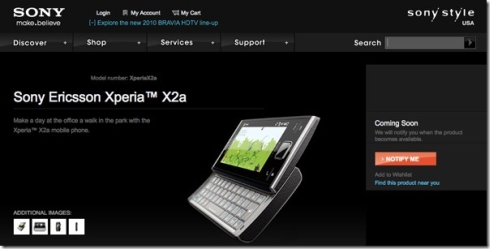 The handset comes with the same features as the original version, but it probably supports North American connectivity and has a way too big price tag. We remind you that the XPERIA X2 features a 3.2 inch TFT resistive touchscreen display, with a 800 x 480 pixel resolution, a full QWERTY keyboard, an optical trackpad and the XPERIA panels UI.

There’s also an accelerometer on board, as well as stereo speakers, a 3.5mm audio jack, 110MB of internal storage, 256MB RAM and 512MB ROM. A microSD card slot is included among the specs, too plus an 8 megapixel camera with touch focus, geotagging and an image stabilizer. Worth the big bucks?