The folks of windowsmobilelouisville.com decided to compare the good old Spb Mobile Shell which we saw in action on devices like the Mogul or 6600 with the brilliant TouchFlo 3D user interface, present on all major HTC hits. The comparison of the two showed that TouchFlo 3D may look great and offer great customizability, but it lacks substance and functionality. 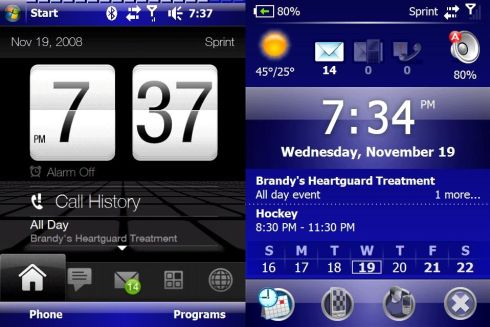 After reviewing the two interfaces, the experts concluded that Mobile Shell’s Now panel offers much more useful info than TouchFlo 3D’s Home Tab. Another disadvantage of the latter is its large flip clock, which you can make smaller to view more things on the screen. Also a flaw of the newer user interface is that it tends to crash and re-load a lot.

The contacts tab of the TouchFlo 3D UI looks great, but the “Rolodex” might get you to pull up the wrong person out of the contacts list. This opposed to the 15 contacts slots of Mobile Shell with a 16th one for pulling up contacts. Not a hot looking option by any means, but still a very useful one. There is one section where TouchFlo 3D has the upper hand and that is the cool weather tab and the photo tab.

For more info on this comparison, check out this address.