People are constantly dreaming about innovation, about the future, about new gadgets that are pretty and do crazy things. A transparent smartphone is on everyone’s wishlist and we’re closer than ever to that moment, courtesy of Polytron Technologies, who is working on making a completely transparent handset. 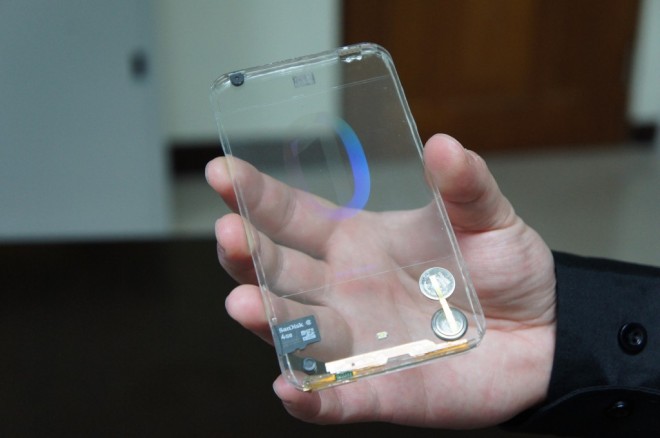 The folks of Mobilegeeks visited the HQ of Polytron and spent some minutes with their prototype transparent handset. The goal is to showcase the early stages of hardware integration, in order to get OEMs on board with this initiative and with Polytron’s potential. Usually transparent devices were a thing that belonged to sci-fi movies and as you can see in the photo and video, this thing is totally transparent. There are some prototypes for transparent batteries out there, that could find their way on this device.

We’ve seen LG and Sony making transparent or partly transparent phones, so this can be done in the world of modern smartphones. The SIM cards and SD cards are not quite there yet, so as you can see the microSD card in here stands out from the rest of the see through slab. In order to minimize the visual impact, the SIM card will be placed right on top of the SD card and you can also see two small metal batteries here in this setup. At the top there’s the camera, speaker and microphone. Do you think the future holds such devices for us?