WMware has created a technology that will allow cellphones to run two operating systems at once, even if we’re talking about Windows Mobile and Android. It’s all done via the company’s Mobile Virtualization Platform (MVP), allowing the two OSes to function live, even on a machine with 256MB RAM. 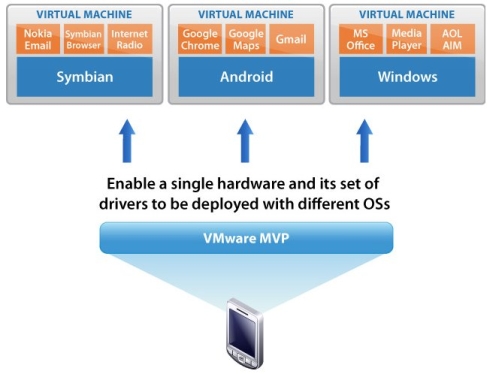 The same technology will support moving contacts, apps and other data from one phone to another more easily, which is another advantage of WMware’s creation. MVP is based on “an ARM hypervisor solution”, able to run on ARMv4 to ARMv7 CPU architectures and supporting any proprietary or commercial OS and RTOS.

Initially, the platform was meant to enable dual boot solutions, but now it’s able to support dual profiles on a phone, both receiving calls, downloading data and more. Even Microsoft is watching the evolution of phone virtualization, but it turns out that there’s no market demand for it just yet.

Prototype phone testing will take place in 2011, with mass production of virtualized smartphones taking off in 2012. In the meantime, here’s a video demo of MVP: