This week’s BUILD 2011 event is more important than one may think, especially since Microsoft showed the world its plans for the proximal future and they very much involve Windows 8. There was also a Samsung tablet present for the demo at BUILD, showcasing the abilities of the new OS, that draws its inspiration heavily from WP7. 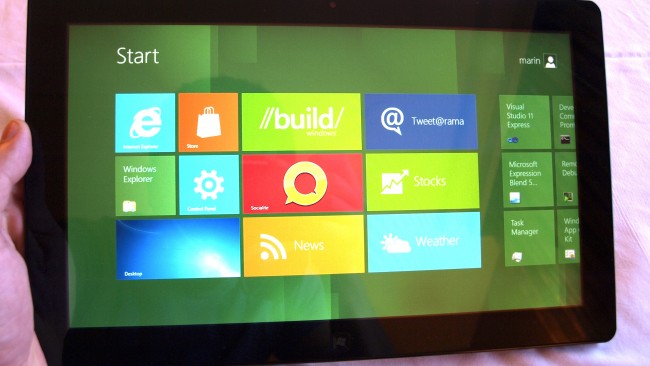 While Microsoft and Windows have been dominating PCs for a while now, Apple has just recently started ruling over the tablet segment and MS certainly can’t have that happening. Thus, they’ve started customizing the next iteration of Windows and making it compatible with tablets. The result is the OS you can see in action in the video below, looking quite interesting and basing its interaction on gestures, swiping, live tiles and whatnot.

Yes, we’re promised a boot time of 8 seconds, loads of multitasking, very low specifications for the OS to work and other goodies like that. We can even switch to the classic Win 7 look if the tiles view of Metro UI doesn’t suit us. Folks who tested the Samsung Win 8 tablet say hat it’s very responsive, but the touchscreen is not the only way to go, as you can attach a keyboard and mouse to it, if you want.

The gesture system involves swiping from top to bottom to bring up contextual menus, while a swipe from the right will trigger “Charms”, a way to quickly access system controls. A swipe from left will bring up to the main screen the previous app. The gestures are also available in a multitasking way, allowing you to move an app to the left and right of the main running software at that time.

The question is: do we really dig Metro UI or do we want more?