Microsoft has all the reasons to celebrate, since their Windows Phone Marketplace has just reached 25,000 apps and a very fast rate of growth. If I remember well, towards the end of last year, WP7 launched with no less than 5000 apps and now it has evolved to this number. 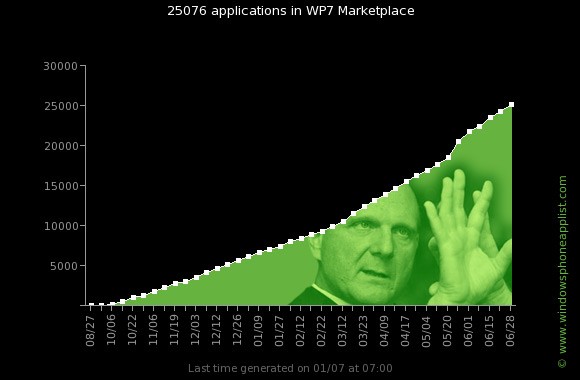 The info about the apps comes from a site that tracks comings and goings within it, so the figure’s debatable it seems. Other WP7 trackers still list numbers under 25,000, but only an official source can confirm the real number. Well, let’s hope that some of the software is not filler, like Android used to have when it was younger, piling in ringtones and wallpapers with full-fledged applications.

The bottom line here is that the WP7 ecosystem is growing steadily and faster than previously. At the end of March it had 11,500 apps (5 months from its launch), while in the following 3 months it achieved 13.500 more applications. With this rate of acceleration and Mango coming soon, there’s no reason for Microsoft not to say “ka-ching” in 2011.