Happy birthday YouTube! It’s been five years since the world’s most important video sharing website was launched and the service has reached an incredible 2 billion views per day performance, that’s double the prime-time audience of 3 major US television networks combined. 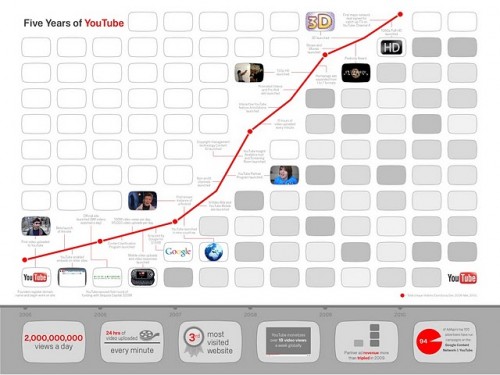 YouTube.com was launched on May 16th, with the purpose of allowing anyone to easily upload videos online and share them with the whole world. Initially, it was all an experiment, a service for vloggers and viral videos, but now YouTube supports HD and 3D, plus it broadcasts sports events in over 200 countries.

YouTube also offers Hollywood movies and gives indie directors a chance to shine, while interviews that will never reach TV have found their place online. In order to celebrate this joyful event, the YouTube Five Year Channel was launched, with the “My YouTube Story” project included, featuring people from all over the world describing how YouTube changed their lives.

You can upload your own story over here and it’ll appear on the above-mentioned channel’s video wall/map. Also, you must know that celebrities like Conan O’Brien, Vint Cerf and Katie Couric posted their favorite collections of videos online. Happy bday YouTube!