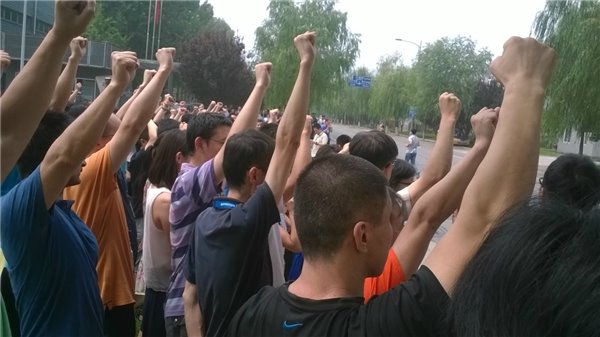 Former Nokia employees who have been laid off with the recent wave of Microsoft firings are certainly unhappy about their current situation. As you know, a few weeks ago Microsoft announced it was letting go of 18k people, of which 12k were former Nokia employees. Today a protest was sparked by this decision.

In Beijing along more than 2400 R&D jobs were cut, most of them being major contributors to Nokia’s evolution. Also, other firms that worked with Nokia in China will be affected and new firings will follow. As you can see in the picture above, Chinese employees gathered in protest of the decision. They accept the compensation offered by Microsoft, but they also consider the layoff a great disrespect.

Microsoft had promised bigger compensations by Nokia standards, but apparently they’re not that big. It appears that the firings went down pretty fast, even faster than it’s usual for a big corporation like this. It was also all impersonal, announced via a web page, not even a special letter or email. The Nokia factory from the Yizhuang area will be closed soon and the staff has already been fired.

This destabilizes the region and leaves an entire community without jobs. Hopefully, other industrial areas in the region will take over the staff and use their skills properly… Sad that it has come to this…