The idea of a device that replaces a laptop perfectly and is still able to resemble a phone is growing on us, but still it’s very hard to pocket such tech monsters. One of these newcomers is the LG GW990, spotted briefly at CES 2010 and drawing everyone’s attention through the fact that it uses the Intel Mooreston CPU. Engadget snapped a couple of pictures of the device in a hurry and found out that the GW990 comes with a very, very impressive and large 4.8 inch panoramic widescreen display, HD video, 3D gaming, aGPS a 1850 mAh battery and a digital compass. There’s also WiFi on board, HSPA radio and a 5 megapixel camera.

Also, there seems to be an earpiece at the top of the device’s front, making it a great VoIP unit. As shown in the picture below, the handset’s interface relies on a 3 panel view, at least in landscape mode. Thus, you’ll be using 3 segments of the screen (calendar, GPS maps and media player, for example), at the same time. 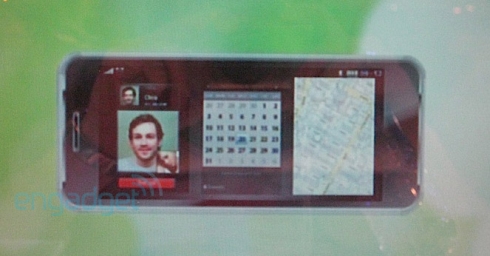