A recent tweet from a Microsoft employee brings news to the folks working for the Redmond software giant: they will be receiving Windows Phone 7 handsets for free. If this proves to be real, it’ll be a smart move from MS, resembling the one made by Google at Christmas time 2009, when it gave Nexus One units to its employees. 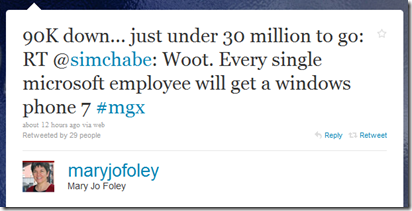 Once Microsoft pulls this off, it’ll have 90,000 handsets activated right from the start, a solid user base to test apps and services on. Also, the work force will be kept happy because of the freebies and they’ll mess with the devices and possibly correct bugs.