Showcased at Nokia World 2011 a week ago, the Nokia Lumia 800 is one of the first WP7 devices from the Finnish maker that will make it to the market this month. Actually, 3 UK already has an announcement to make: the product is coming on November 16th in black. 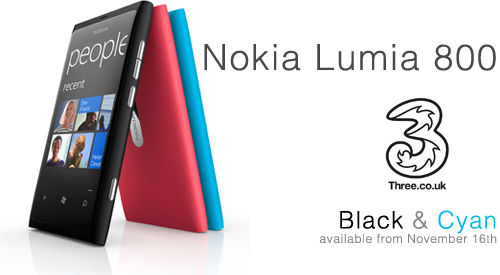 The cyan version of the smartphone will come on November 28th, also through 3 UK. Nokia Lumia 800 comes with a 1.4GHz processor, an 8 megapixel camera and exactly the same design as the Nokia N9. Of course, the exceptions are the camera button included on the Lumia 800 and the capacitive buttons below the display, for Windows Phone Mango navigation.

Now we have to wait for the Nokia Lumia 710 and its price/launch date. Last I heard, the Nokia Lumia 800 was coming to the UK with a 400 pound PAYG offer. Orange and Vodafone will also be selling the device, but the date they’ll launch it is unknown. As you ready for a taste of the N9 with Mango OS on board instead of MeeGo?