Home Sony Sony Prepares the Launch of a New Smartphone on August 3rd; A... 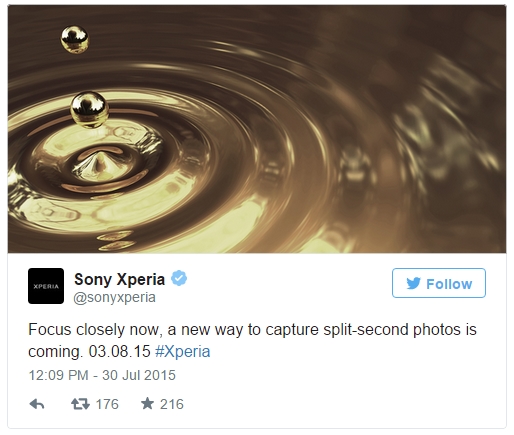 Getting close with every day to IFA 2015, it’s expected that several producers to start revealing teaser images for their upcoming products. Samsung was the first one to unveil such a promotional material, and now Sony follows closely from behind. This Japanese producer has been preparing a pretty interesting device when it comes to its photo capabilities.

As you can see, on August 3rd, Sony will announce a new device capable of capturing spli-second photos. Even if there’s no extra details, we suppose that all this buzz is about a phone with the new Exmor RS IMX230, a 21-megapixel sensor. This one offers 4K Ultra HD video recording, an f/2.0 aperture, and a new focus technology in 192-points.

If you are updated to the phone market, then you definitely know that Motorola Moto X Play is one of the first smartphones on the market with such a image sensor, module that got the 3rd position in DxOMark top of best cameras.

It remains to see if this mysterious device will be indeed the Xperia Z5, or if the Japanese company keeps it hidden till IFA 2015.