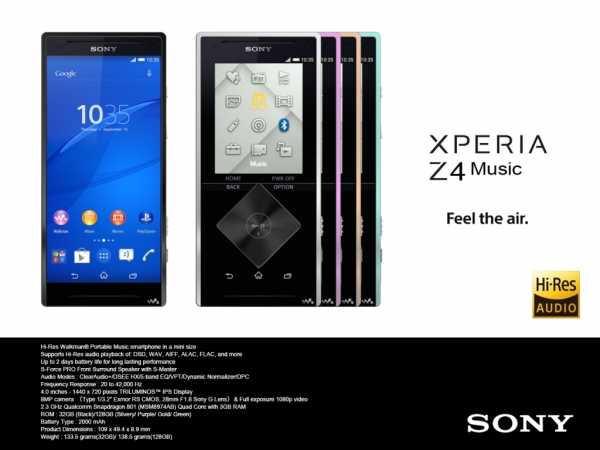 This year at the CES 2015 tech show Sony arrived with one of the most expensive media players on the market, more precisely with the Walkman ZX2, a device priced at neither more nor less than $1.200. Today, through the guys from igeek.com.cn we get to know that recently Sony Japan posted by mistake a couple of photo renders with a Walkman device called Sony Xperia Z4 Music.

From its specs list we get to know that we’re dealing with a Hi-Res Walkman portable music smartphone in a compact casing. Xperia Z4 Music comes with a 4.0-inch TRILUMINOS IPS display that offers a 1.440 x 720 pixels resolution, a quad-core Qualcomm Snapdragon 801 (MSM8974AB) processor clocked at 2.3 GHz, 3 GB of RAM memory and 32 or 128 GB variants.

Next, we have a 8-megapixel Exmor RS rear camera with a f/1.8 aperture, and a 2.000 mAh battery that will offer up to 2 days of lifetime. In terms of music playback, this device offers support for dsd, wav, aiff, flac audio files and much more. We get a frequency response of 20 to 42.000 Hz, a S-Force PRO Front Surround Speaker with S-master and 6 audio modes: Clear Audio+, DSEE HX, 5-band EQ, VPT, Dynamic Normalizer and DPC.

Even if there’s no other information about its official launch, we may suggest the fact that the best place to be introduced such a device is the MWC 2015 show that starts in March. It remains to see if the price will as high as the Walkman ZX2 player. What is your first opinion about this device?