If you’re an LG Ally owner, you must know that Verizon has been rolling out a software update for your handset these days. It started over the weekend and it’s now available on most devices, bringing bug fixes and OS improvements. 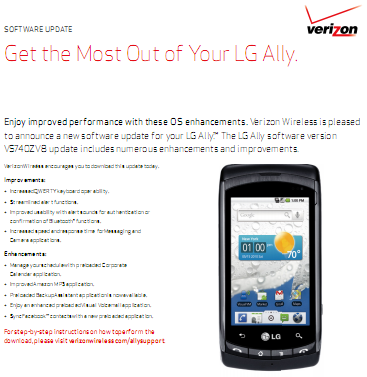 The improvements include an increased keyboard operability, streamlined alert functions, better usability with alert sounds for authentication or confirmation of Bluetooth functions.

The Camera and Messaging apps now have better speed and response time. The Amazon MP3 app is also improved and you’ll get a backup assistant software with the update on your Ally.