It’s been a while since we’ve had info regarding Windows Mobile 7, since everything related to Microsoft was ZuneHD getting detailed and the Nokia partnership recently. Now, courtesy of Pocketnow, we have a look at the developer guide to WM 7 and we realize that it aims to make the framework and API level similar to the one of Mobile OSX or even better. 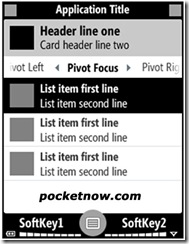 From the official documents we learn that Windows Mobile 7 will include a SmartSearch feature, an user interface that uses context-sensitive searching via the Association Engine. Turns out that even apps can bring SmartSearch upfront, allowing the user to take advantage of the feature, even if they’re in the Contacts menu for example.

WM7’s camera API will provide overlays, video capture, EXIF and more, while Office Mobile also gets an upgrade, supporting SharePoint and charts. Multi-touch is also on board of the Windows Mobile train and we find out that we’ll no longer worry about the suspend/resume power model, since the device will always be on.

A redone menu system, Cron jobs, multiple folders and Mail/note items in Pocket Outlook Object Model plus built-in XML complete the impressive list of features from Windows Mobile 7. If you’re keen on more details, have a look here, at the original source.