Turns out that people are more pleased with Windows Phone 7 than with BlackBerry OS and they’re also more likely to buy a Microsoft OS-based handset than a RIM one in the following months. We’re not the ones making these claims, but rather the figures of a recent ChangeWave study, that analyzed the trends in mobile operating system adoption. 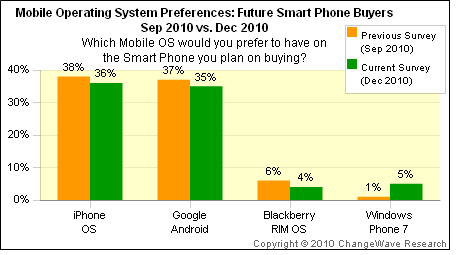 5% of the study’s respondents would choose a Windows Phone device, while 4% would go for a BlackBerry. Meanwhile, the iPhone OS rules the pack with 36% and Android comes second, with 35%. As far as satisfaction levels are concerned, 44% of the folks questioned are pleased with Windows Phone, versus the 72% pleased with iOS and 58% with Android. BlackBerry is probably registering low numbers, since it isn’t mentioned.

The situation could change for the better for RIM over the following months since we’ve seen the company’s portofolio that includes many appealing handsets, part of the Curve, Bold, Torch and Storm series. They will combine large touchscreens with portrait QWERTY keyboard and 1.2GHz CPUs and maybe QNX OS will be a good replacement for the BB OS.